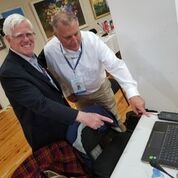 Brian Steckler and Lin Wells, of GMU’s C4I & Cyber Center, review Brian’s designs for rapidly deployable communications and networking kits to support disaster relief and other situations needing “Hastily Formed Networks.” The equipment was shown in Berovo, former Yugoslav Republic of Macedonia, during a NATO roundtable for senior leaders on Military and Defence Aspects of Border Security in southeast Europe in late September 2017. The Roundtable was jointly sponsored by Mason’s C4I & Cyber Center and the U.S. National Defense University (NDU) and supported by NATOs’ Science for Peace and Security (SPS) Programme.

..More on the NATO Roundtable

Did you notice? We have adopted a new name:

The Center of Excellence in Command, Control, Communications, Computing, Intelligence, and Cyber  also to be known as: The C4I & Cyber Center

Our new name reflects our continued objective to remain competitive for sponsorship by our Department of Defense and Intelligence Community customers. While we have been active in C4I systems issues associated with Cyber technologies for several years, our old name did not make this clear. Cyber is a major area of concern for these organizations, so it became important that our Cyber expertise be evident in our name.

Resilience:  Beyond just “bouncing back,” resilience includes pre-crisis preparations and risk mitigation, effective incident management, and leveraging shocks and stresses to emerge stronger. Initial Activities:  The Lab leverages two complementary initiatives that recently have moved to GMU. STAR-TIDES and Collaborative Community Resilience (CCR) help build sustainable resilience to natural and man-made emergencies while increasing opportunities in under-served communities. They are described in more detail in the :