The CWIX exercise is an annual event, based at the Joint Forces Training Center (JFTC) in Bydogszcz, Poland, and extended widely through the classified Combined Federated Battle Laboratories Network (CFBLNet) and the unclassified Internet. CWIX focuses strongly on highly structured testing of systems that claim to be interoperable.

C2SIM Validation testing in CWIX 2019 was conducted using virtual private networks (VPNs) over the unclassified Internet. The national teams that participated were: Germany, Italy, United Kingdom, and USA (sites at GMU, ATEC Huntsville AL, and NPS Monterey CA). At the end of testing, eleven of the twelve Test Cases were reported with full success. The twelfth case was a limited success; the server problem with that case was resolved the next day. For more information…

—end of a long day of testing—
Lt Col Biagini of NATO MSCOE and Sebastian Steigler of German company iABG and Dr. Mark Pullen of the C4I and Cyber Center at George Mason University 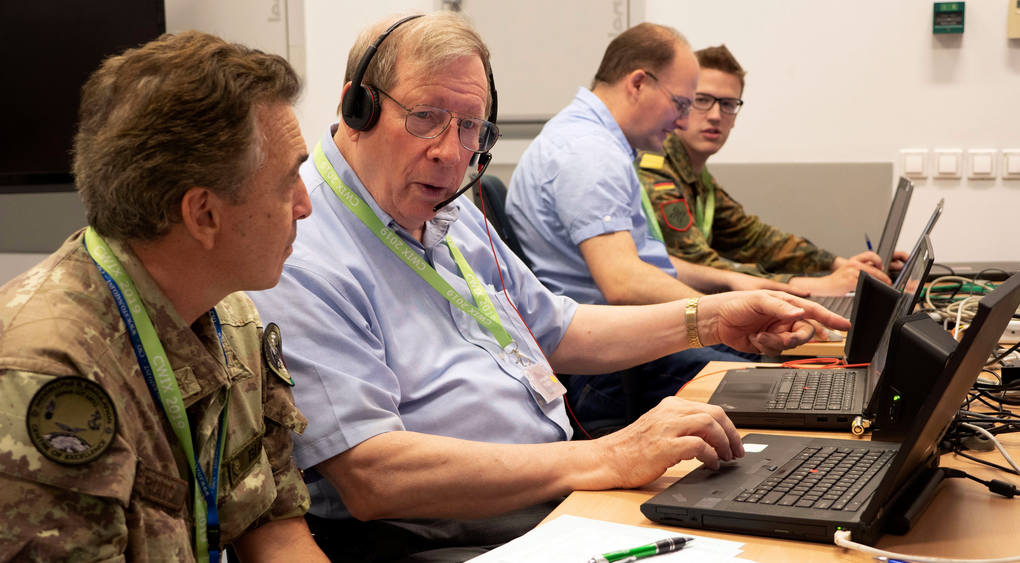 Did you notice? We have adopted a new name:

The Center of Excellence in Command, Control, Communications, Computing, Intelligence, and Cyber  also to be known as: The C4I & Cyber Center

Our new name reflects our continued objective to remain competitive for sponsorship by our Department of Defense and Intelligence Community customers. While we have been active in C4I systems issues associated with Cyber technologies for several years, our old name did not make this clear. Cyber is a major area of concern for these organizations, so it became important that our Cyber expertise be evident in our name.

Resilience:  Beyond just “bouncing back,” resilience includes pre-crisis preparations and risk mitigation, effective incident management, and leveraging shocks and stresses to emerge stronger. Initial Activities:  The Lab leverages two complementary initiatives that recently have moved to GMU. STAR-TIDES and Collaborative Community Resilience (CCR) help build sustainable resilience to natural and man-made emergencies while increasing opportunities in under-served communities. They are described in more detail in the :